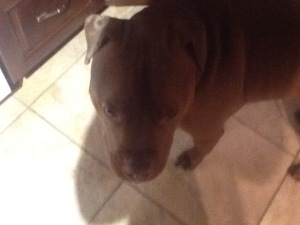 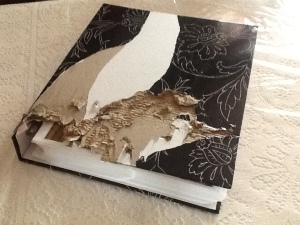 The Dog ate my homework…  You know that comical phrase you hear that kids use to get out of why their algebra isn’t done?  I am starting to believe there might be some validity to it!  I have this little friend, he is the most adorable looking little guy, but my oh my, is he naughty.  It never ceases to amaze me how he can somehow determine what to destroy based on it’s value to his people.  For example, there was a load of presents under the family Christmas tree and what does he grab…a very small box with a very expensive bracelet in it and he destroys the thing, he literally obliterated it!  He has this uncanny knack.  So the other night he has a sleep over with me and instead of crating him, as he had already been in a crate for a few hours when I picked him up, I let him sleep with my daughter (as the cat was in my room, which he is very curious about and wonders what it might taste like).  She got up to go the bathroom in the middle of the night and he took off like a shot and she was too tired to give chase.  He came upstairs and stood outside of the door with the kitty snack in it…but alas, no one was letting him in…what to do, what to do, he thought.  Well, the humans weren’t letting him in so they need some sort of message that denying him the ability to have some early morning excitement was definitely not cool!   He wanders into the Living Room and sees a basket with my news papers and recycles…he decides to pull those out, and then BINGO, he’s found his target, something to really impress upon me that he didn’t appreciate my locking him out. Underneath all those papers was the Photo Album from my daughter’s wedding, he somehow removed all those flyers without a rip, in fact, they were almost nicely piled beside the basket.  He spent the next while trying to remove the photo album with his teeth, I mean, who knows, maybe he wanted to peruse the photos since he had nothing better to do.  All I know, is the album cover is definitively toast!  So the next time I hear someone use their dog as an excuse, the dog ate my cheque book so I am unable to get my rent to you right now, or I can’t finish my taxes as the dog ate my T4 or honey, I really did get you an anniversary card, but the dog ate it….I am going to give that person the benefit of the doubt.  In my humble opinion,  it somehow seems that dogs are very intuitive about what they pick and choose to make their point with when they are displeased!

One thought on “Thoughts to Paws over….”