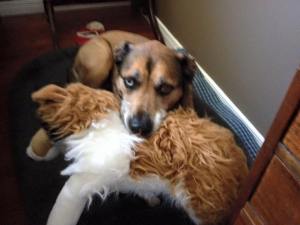 We all know that our pet is cool!  That they can do tricks that would make other’s eyes pop out of their heads and jaws drop!   I am the same as everyone else, I recognize my boys’ brilliance!   When we got Lucas, he was very enthusiastic at greeting us at the door, in part, I think it was because he was so grateful we came back every day and didn’t abandon him!  After a few times where his exuberance caused me to get knocked into a wall or head bashed against a door frame I had to come up with some way for him to show his appreciation!  It took awhile, but we realized if he brought a stuffie in his mouth as a gift, he was less liable to launch himself against us, which was much less invasive, so we went with that.  If he came to the door with no holds barred, we would simply ask him where his “Baby” was, he would run away and look for it (giving one time to get their footwear and jacket off) and  everyone was happy!  As he is getting older, he misplaces his toys and he also doesn’t hear us all the time, so if he happens by and realizes someone has come home without detection he feels remiss that he hasn’t presented them with some sort of recognition.  Yesterday, I entered the front door, with no Lucas, I called out  “Hello!”   Big boy jumped off his perch, the downstairs couch, which he spends most of his day languishing on nowadays and came to say Hi.  He was running up and down the stairs and turning in circles, as he couldn’t find a toy.   As he was searching around at the bottom of the stairs I informed him “your Baby is in Danielle’s bedroom”.  My brilliant boy stopped his fruitless search and went right where I instructed and brought me his stuffie.  I have been marveling ever since how fantastic his grasp is of the English language and of our psychic bond!!!  It’s wonderful to celebrate our animal friends talents and to let them know how truly gifted they are!  (might I say it is cool simply that I am actually heard….he may be the only one at my address who listens to me when I talk, that in and of itself is a pretty cool trick!)