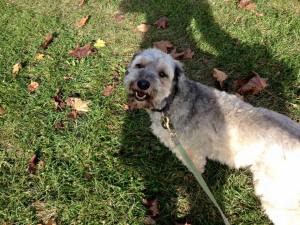 There is nothing like being the center of attention!  I am one of three girls, and I will say it was hard to shine some times with my older sisters around.   I think it is common when there is more than one child in a family for one to feel they go unnoticed, sharing the love can be hard.  I think when there are multiple fur babies under one roof, they too, can feel a little jealousy and a lack of recognition.  My little bud Puddles, otherwise known as “Puddy Duddy”, has a house mate that has a very out going personality and to be honest, she is a little high strung.  Pud is laid back and because he is so chill he can get over looked.  Often when we are out on our walks, he is quietly making up the rear, partly so he can try and forage for garbage, he can’t pull the wool over my eyes, but he also hangs back as Mattie is out front pulling like a sled dog trying to win the Iditarod.  Yesterday when I went to pick up my charges I realized that only Pud was home, he was happy to see me, but not as insistent with his barking, there was no one to compete with!  When we got out on our walk, I swear he was strutting!  He was out in front, with a little bit of swagger going on, it was the sweetest thing.  We were half way into the walk and we were strolling through the park, Pud  was sniffing the base of a tree when he looked back at me with a smile, his eyes glowing, he was having a wonderful time being the center of attention!  I gave him a little scratch under his chin and let him know, that although he doesn’t realize it, I see him and I recognize how special he is!